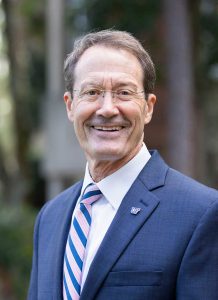 Charlie Lane is the University of Florida’s Senior Vice President and Chief Operating Officer, responsible for overseeing numerous university-wide functions including Information Technology, Human Resources, and Office of Internal Audit, Business Affairs, and Real Estate. He was appointed to the position in March 2014.

Dr. Lane came to UF from the University of Southern California, where he began working in 1991 and last held the position of Associate Senior Vice President, Administration. Dr. Lane’s career spans both the for-profit and non-profit sectors. Prior to working for USC, he worked for the University of Houston, Intermedics, Inc., and Texas Instruments, Inc.

Dr. Lane and his wife, Natasha, live in Gainesville with their daughters, Grace and Hope.